Mobilizing action for the SDGs in schools

Engaging school learners to take actions for the SDGS...

The global week to act for SDGs which occurs annually in September, started five years ago with its goal to mobilize millions of people throughout the world to take actions towards the achievement of SDGs.

The UN in Lesotho this year engaged over 500 high school learners in Maseru and Mafeteng districts, from 20- 23 September 2021, these engagement sessions were aimed at promoting awareness among learners and proving a better understanding of the SDGs, realizing that schools are important stakeholders in catalyzing the sustainable development agenda for 2030.

“The SDG session made me realize that I too can contribute to this big agenda, which I never thought I could contribute to as a teenager, but today I learnt at all our actions count”, explained Limpho Tjopa from Letlapeng high school.

Learners from Letlapeng, Morapeli and Lithabaneng high school committed to taking concrete actions as well as introducing SDGs in their communities. All schools were provided with SDG knowledge resources, which focused on the introduction of the SDGs at high school level and possible individual and community actions.

“We are very grateful for the SDG learning materials which we received, our wish is to have perhaps a module on SDGs in the Lesotho curriculum, its important to start teaching children at an early age about the SDGs if we want a better future for this country, “remarked Leboa Chabela Principal teacher at Lithabaneng High School.

The UN art competition was also launched in the three schools during the SDG sessions. The competition called on  learners to prepare submissions for an art competition under the theme : “Reimagine, Rebalance, Restart: recovering together”. The artwork was in any form: paintings, pictures, collages etc.

Ten learners out of the five hundred learners who participated from the three high schools were awarded in the three art categories at the UN day event in Maseru which was held on 22nd October.

“I see an industrial revolution after COVID19, I also see a positive change in the lives of the Basotho people especially those in the highlands because the fertile soil is at their advantage for agriculture, if we go back aggressively into agriculture, I believe that can transform the economy and achieve SDG 2 which is zero hunger” said a jubilant Kamohelo Nthahisane from Lithabaneng high school who was the first prize winner in the painting category.

The Minister of education, Hon Mamookho Phiri who presented the awards the learners, congratulated them: “I applaud all the learners who are going to receive prizes today, I also want to recognize everyone who participated in SDG week and the UN art competition. Young people are indeed the future of our country.”

The competition entries reflected Basotho learners who all want a better future for Lesotho, and this vision can be achieved only if we are in it together, as the UN continues to advocate for the acceleration of the SDG’s with only 9 years remaining. 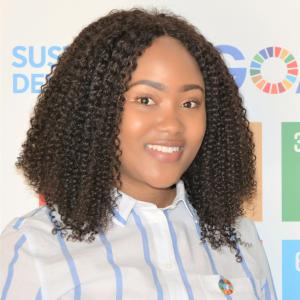