The UNDAF is a medium term results framework that describes the collective vision and response of the UN system to national development priorities. The UNDAF describes how the UN country team will contribute to the achievement of development results based on a common country analysis and the UN comparative advantage. Currently, the UN framework of work for Lesotho is under the 2019-2023 UNDAF.

The Resident Coordinator in Lesotho

Ms. Mukwashi has devoted more than 25 years to public service, working on poverty alleviation, tackling injustice and inequalities at the intergovernmental and non-governmental level while holding leadership positions at the United Nations and externally. Within the Organization, she served with the United Nations Volunteers programme (UNV) in Germany as Chief, Volunteer Knowledge and Innovation, as well as Chief of Advisory Services. She has also worked on country support programme on gender, population, and development with the United Nations Population Fund (UNFPA) in Zambia.

Outside the United Nations, she most recently served as Chief Executive Officer of Christian Aid, an international development and humanitarian non-governmental organization working in Africa, Asia, Latin America and the Caribbean, and the Middle East. Prior to that, she occupied senior positions with global non-profit Voluntary Service Overseas (VSO International), as well as the Common Market for Eastern and Southern Africa in Zambia.

A published author and an award-winning Chief Executive Officer, Ms. Mukwashi is also a trustee of UK think tank Demos and is a Thursdays in Black ambassador raising awareness of gender-based violence for the World Council of Churches. She has also served in non-executive capacities as a trustee for the British International Development Network (BOND), as a president of Akina Mama wa Afrika, a pan-African feminist organization, and as a trustee of the UK Disaster Emergency Committee (DEC). 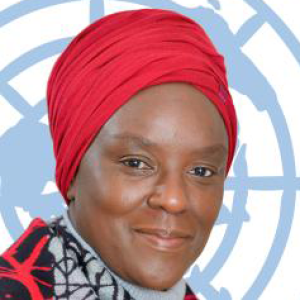