Statement of UN Resident Coordinator on the Launch of the Kingdom of Lesotho National Strategic Framework and Action Plan to Combat Trafficking in Persons.

Please allow me this morning to pay my respects to:

THE RIGHT HONOURABLE THE PRIME MINISTER

HONOURABLE PRESIDENT OF THE SENATE

HONOURABLE SPEAKER OF THE NATIONAL ASSEMBLY

HIS LORDSHIP PRESIDENT OF THE COURT OF APPEAL

DEPUTY MINISTERS OF HIS MAJESTY’S CABINET

I am delighted to be here today for the very important launch of the Lesotho National Strategic Framework and Action Plan to Combat Trafficking in Persons.

Trafficking in Persons poses a serious threat to the Kingdom of Lesotho and this framework and action plan could not come at a more important time.

The Kingdom of Lesotho suffers high levels of trafficking in persons, particularly in women, children and people living in poverty, or close to the poverty line.

Without a strong action plan, rising vulnerability will increase the likelihood of trafficking in persons.  Unfortunately, the Kingdom of Lesotho has experienced a decade of rising vulnerability.  Individuals’ incomes have fallen steadily since 2011, whilst food insecurity has become more pronounced under drought, which has in turn become more commonplace and intense.  Unfortunately, the impact of COVID-19 has triggered even greater vulnerability and those poses a higher risk of trafficking in persons.  Massive employment losses have disproportionately affected youth, women, migrants and informal workers, and left many households desperate and entirely reliant on Government social protection schemes.

Further, in 2020, the US State Department downgraded the Kingdom of Lesotho in its Trafficking in Persons Report from Tier 2 to Tier 3 - the bottom ranking – due to limited success in prosecuting human traffickers and limited protection for victims of trafficking.  Not only does the US downgrade of Lesotho’s efforts to combat human trafficking illustrate the very desperate situation of many Basotho, which warrants immediate action, it also threatens future trade agreements.  The African Growth and Opportunities Act is partly responsible for the Kingdom of Lesotho’s thriving textiles sector, which provides employment to over 40,000 women, but if we cannot combat human trafficking then there is a risk it may not be renewed after 2025.

I would like to congratulate the Government of Lesotho for its work to date on combatting human trafficking: on sensitising officials, community leaders and vulnerable groups on trafficking in persons, in establishing the National Consultative Committee on Migration (NCC), in signing the Global Compact on Migration and in incorporating border management, counter trafficking and smuggling, and internal migration management in the NSDP II.  However, I would also like to encourage you to keep persevering to combat trafficking in persons, including by embracing the National Strategic Framework and Action Plan to Combat Trafficking in Persons.

The National Action Plan proposes concrete activities to prevent Trafficking in Persons, to prosecute traffickers and to offer protection to victims of traffickers.

To conclude, please let me quote Madiba: ‘A Nation should not be judged by how it treats its highest citizens, but it's lowest ones’.  Thank you. 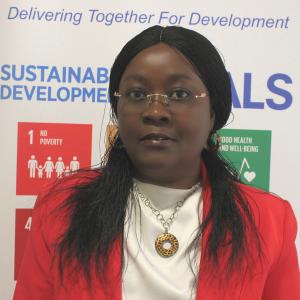